Английская газета Russia Beyond The Headlines, January, 2012
Alexander Kravtsov based his business on selling outdoor and novelty products. He has managed to corner a profitable new niche in the market, one with hardly any real competition and plenty of room for expansion. 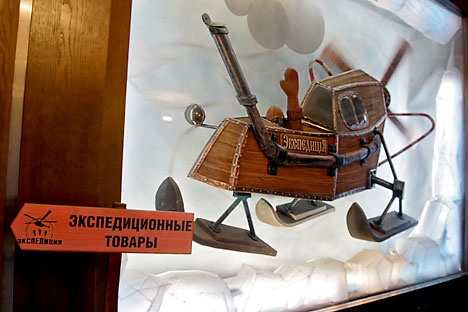 As Alexander Kravtsov, the man behind the Expeditsiya brand, was traveling around Chile, he came across a figurine of a man at a souvenir shop. When you pulled a string, his tiny penis went up. Kravtsov bought the toy and sent it to a factory in Indonesia, asking them to make the same figurines in the image of the Russian Santa Claus, Ded Moroz. This story is typical of Kravtsov’s approach to his business, which balances sales between serious equipment for outdoor activities and novelty products.

So far, the Expeditsiya chain’s combination of highly efficient logistics and an original and eye-catching assortment of goods has proved to be extremely successful.

Today there are around 360 Expeditsiya stores across Russia, Ukraine, Belarus, and Kazakhstan. Every year the company also organizes the Expeditsiya Trophy off-road race, one of the longest winter car races in the world. The company’s annual revenue is close to $100 million, with a profit margin of around 20 percent. Most of the products are made in Southeast Asia, but Kravtsov also owns a factory outside Moscow where some of the goods are assembled. 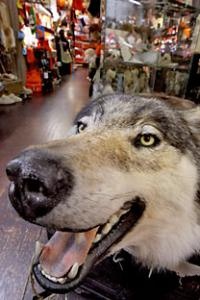 When geologists are looking for minerals, different geological maps of the same area are placed on top of each other, and drilling begins where the contours meet. Kravtsov decided to build his business where the outdoor tourism and souvenir industries overlapped. And this position in the market is perhaps the secret of Kravtsov’s success – the brand has virtually no competitors. Expeditsiya occupies the middle ground between the outdoor sports retail sector and the gift and souvenir sector, and the main players in both of these markets do not see Kravtsov as one of them.

“The team at Expeditsiya have been very shrewd and have managed to develop a new niche,” agreed Alexander Osadchy, General Manager of gift chain LeFutur.

All goods and services that come under the Expedition brand are generally divided into three sections: “before and after the trip,” “on the trip” and “fun.” Kravtsov associates the first category with a certain nostalgia for travel in and around Russia. For the trip itself, Expedition sells outdoor activity equipment that can also be used in everyday life such as camping mugs, utensils and flashlights. The “fun” part of the business means the famous orange T-shirts with humorous captions on the back, Expetro! toys, a kit for sex “in extreme conditions” and various other knick-knacks for which the brand has become known. A customer once told Kravstov that he had bumped into a couple of strangers in the middle of nowhere in Russia’s Far North, and they, like him, were both were wearing the orange Expeditsiya T-shirts.

According to Kravtsov, the tourism component of the brand is built on “genuine life experiences,” and Kravtsov will be the first to admit that the souvenir and novelties section of his business is not the result of his own ideas. In fact, Kravtsov has introduced a ban on innovation.

“We prefer to keep an eye on what’s out there, take what we find into our business, and not waste time and energy on thinking up new products,” he said. 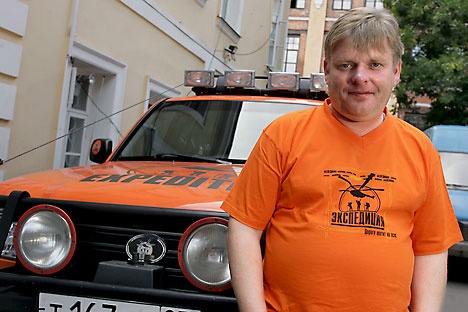 Alexander Kravtsov, the man behind the Expeditsiya brand. Source: Kommersant

For example, Kravtsov and his managers once went to a Hong Kong restaurant where one of the rooms was made of ice; Kravtsov now plans to install a similar room in one of his three Expeditsiya restaurants. On a trip to the United States, the businessman bought a map of the world, where the owner can mark the countries he has visited by rubbing out the background; today he has a similar item as part of his own product range. Kravtsov says that around 80 percent of Expedition products are result of industrial espionage.

Absurd as it may seem, the chain does not spend a single kopek on advertising. The ubiquitous orange T-shirts have been enough to make the brand known. And the Expeditsiya Trophy also attracts a lot of media attention. Kravtsov says the success of his company also relies on a constant renewal of the range of goods on offer, with new products forming between 35-40 percent of the company’s revenues. That said, Expeditsiya’s most popular products continue to sell well for up to five years.

Competitors fr om related sectors say that the well-selected range of goods on offer in Expeditsiya stores is one of the keys to the company’s success.

“If they continue to uphold their clearly defined image, Expeditsiya stands to grow and prosper in years to come,” said Sazhin from AlpIndustryia.

But LeFutur’s Osadchy believes that no matter how good the idea, times move on, and if Expeditsiya wants to continue to expand its business and increase its profits, it may have to start concentrating on other commercial ideas.

According to Kravtsov, at the moment the company is planning to expand in terms of geography rather than concept. Expeditsiya is now setting its sights on foreign markets. In November 2011, Expeditsiya products started to appear in stores in Singapore and Holland.

And what about new directions and new ideas? “We are in a position wh ere we could take a roll of toilet paper, put a whistle in there, label it as a special camping kit, and slap on a price tag of 500 rubles ($16),” said Kravtsov. “We’d have no problem selling it.” 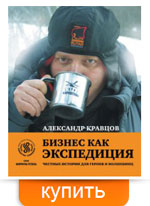